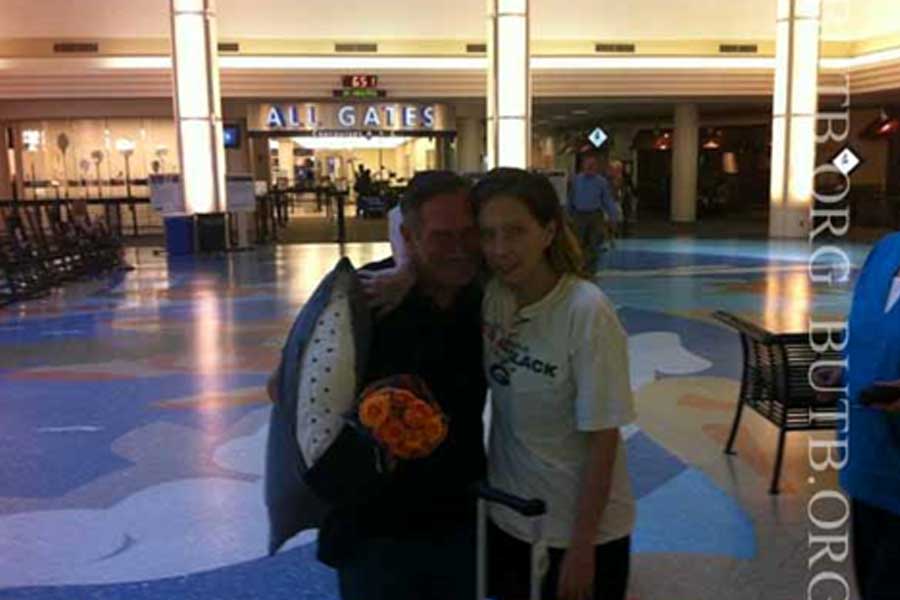 Last night, I ended the evening by driving Homer to his son’s house. I was overwhelmed, not only by how much they look alike, but how humble Shawn is, and very intelligent. He and Homer carried on conversations off and on all night while I watched and smiled.

Shawn’s wife and mother had each told me ahead of time that “Jess it’s going to take a while for Shawn to open up and get close to Homer.” It took two days!

They talked and talked and I felt like I was looking at two peas in a pod. I grinned as I noticed from afar, that Homer not only looked like a glowing ball of joy, but his shoulders were pulled back with confidence, pride, and worth. “Yep, that’s my boy!”

I kept asking myself, “Am I really here? Did all this really happen?”

We called it a night after a long, incredible day.

This morning, Mike and I had the honor of taking Homer and Theresa to a Grandparents Tea at the school. This was Homer’s first time to meet one of his many grandchildren, let alone go to a school function. He met Dalton, his eight-year-old grandson and they connected right away. Dalton even showed Homer to the bathroom and waited until he was done! So cute… tears…

During the tea, they played games, including one where they were asked how many grandpas traveled from out of state to be there? In a flash, Homer jumped up, raising his hand. No joke! Then Mike started to fill up with tears. Homer was so proud and tears filled his eyes with a precious sparkle. We took some pictures and knew that this is what this trip was all about.

We dropped them off and I decided to get Heather out of the house. Our first stop was Starbucks. She and I had talked about coffee before the trip and she said she had not been there in years. Mike got her a venti, mocha Frappacino. She moaned in ecstasy on her first sip. I asked her if she was okay and she laughed out loud, exclaiming “This is so good!” Again, Mike and I just smiled. How we take those tiny moments for granted.

Then we went to shop for furniture. I wanted to surprise Theresa with a new living room set. We picked out a few pieces which she will have in their new place by the first of the month. As we continued to shop she saw a framed “New Kids On The Block” picture. Heather said “Ahhh! I want that!!” I said “It’s yours.” At the next place she picked up kitty knick-knacks and a Jeff Gordon Christmas Ornament. She was a kid on a candy store for sure. I said “Ok, ok, ok!!” and she said “Jess, thank you so much.”

I said to Mike privately “Can you believe all this?” We agreed it still had not truly hit us.

Heather did not want to go home, so we stayed out a little longer. When we brought her back to her house, Homer was outside sitting on the porch with Theresa. So cute!

Mike and I are now headed back to visit for the evening. Tomorrow we are taking all eleven family members out to dinner.

Thursday night was an emotional one, mostly for Mike. I think it really started to hit him that Homer is not going to be around. Homer was the man that changed Mike’s life. Homer gave Mike purpose (since Mike’s dad left him when Mike was two years old). Mike took such care of Homer, doing his laundry, scrubbing his toilet, taking him where he needed to go. Homer taught Mike what loving unconditionally is and to see through people’s looks, struggles, past, addictions, and whatever!

For once Mike did most of the talking. He really wanted to impress on the family what a great man Homer is, for them to realize how amazingly God works. That there is hope for them and lives can change. He wanted them to know that it was not us that made all this happen but that it was GOD. We were simply the hands and feet for God. And that they can do and be the same. Homer began to speak into Mike and I, saying that our work is just beginning. Somehow, the way he said, it I believed him. It was a very emotional, intense day for all of us.

Then I said to Mike “Do you realize what today is?

Yesterday was a long day, Mike bought Homer a TV for his new place, and got some more outfits for the women. Homer and I began to realize that Homer was starting to get comfortable and he was not shaking AT ALL. Homer is an alcoholic who decided to stop drinking as a last dying wish to Heather. We thought that it would be so hard for him. But to our shock, he is doing it and he has no shakes. He does not see it. But Mike and I know it’s total peace!

He told us how he was in bed and Heather hopped in with him. There was only one blanket and so he gave it to her and she said “No dad, you can have it.” So they shared it. They described how good it felt to share that father-daughter moment. Tears and tissue followed! She also asked Homer to shave his mustache. Homer had told us before that he would never shave it off. But Heather asked and he told us that if that’s what baby girl wants that’s what baby girl gets and so he did.

WOW! He looks 20 years younger. Finally it hit Mike and I: between the muggy and sticky and the 20 mosquito bites on me, being on the go for the last 2 months emotionally and mentally; we started to feel a slow crash, physically. We were drained. We went back to the hotel, sat in the hot tub, came back to our room and passed out HARD! We needed it.

Slept for four hours and then got ready to take the family to dinner. They picked the Golden Corral. It’s all you can eat and since Homer and the family like seafood, it was perfect. When we got there, I met Shane for the first time. We had talked through Facebook prior, and I could not wait to meet him.

We bonded right away and he wanted to be by my side all night. Dalton did too. I let the boys take turns on my iPhone playing games, like cars, monster trucks and pimple popper (lol). They loved it.

Shane and Dalton asked a lot of questions and they thought my bracelet said my name Jess. I told them, no its says JESUS. They asked Homer questions too about being homeless. Gracefully, Homer answered. After dinner we went over to Shawn’s and hung out for awhile. They were very grateful for dinner and wanted lots of pictures. I can honestly say that was one of the most comfortable moments for me, and seeing how much they ate and truly appreciated the meal.

We dropped them off and now getting ready for the day. Mike and I have 2 days left here and I know it’s going to be hard to say good bye, especially to Homer.

I will write my final blog Monday, the day we leave.