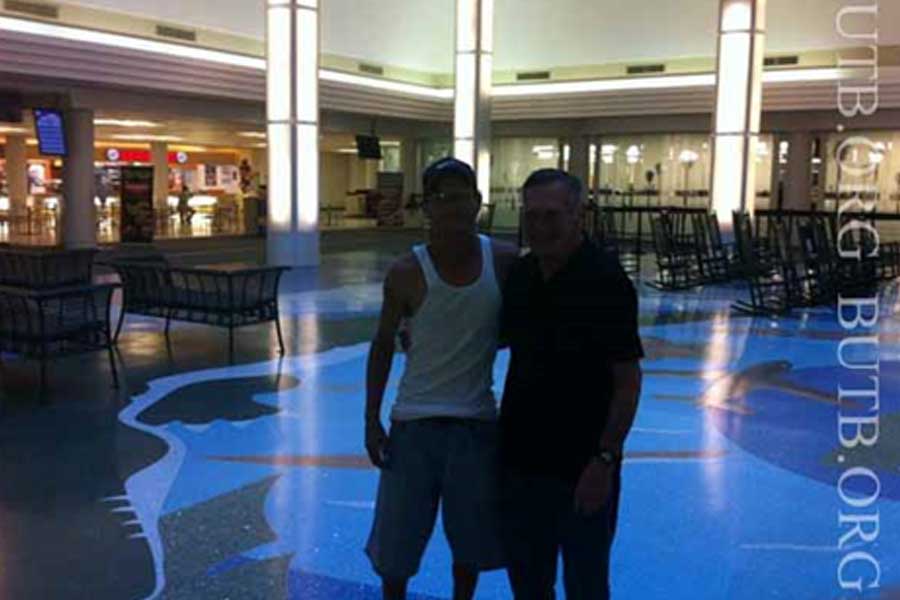 We finally made it home after cancelled flights, due to weather. I am writing my final blog on Homer’s journey. This was quite a trip, even if I say so myself. I will continue where I left off.

Saturday morning Mike and I decided to cook the family dinner. They have no working stove so they eat a lot of sandwiches or cook out of a plug-in skillet or roasting pan, and remember, they have no working air conditioning. I asked Heather what sounded good and she said “I love Mexican food.” Naturally, I said “Great. That’s my favorite as well.” I decided to cook my family favorite, fajitas!

We all piled in the car and headed to the store. After asking Theresa if she needed anything else at home, we got her the basics (bread and drinks etc.). From the store, we went to Shawn’s house to cook because it’s a bigger place and we wanted to feed the whole family. I was excited to cook and the boys wanted to be by my side the whole time. I brought my laptop so one of them had the iPhone, while the other had the laptop. That kept them busy for awhile!

I finally got to meet Heather’s son. His name is Jordan and he lives with his other grandpa. He is 12 years old, but mentally delayed. They think he may be autistic. He is very sweet and very smart. He has been looking forward to meeting Homer even before they all found out he was alive. Heather treats him very maturely, although she too has some mental delays.

When asked of Jordan “What do you think of your Grandpa?” He said in his sweet voice “He is perfect.” Mike and I just looked at each other with tears. As I began to cook for an army, Jeanette, Shawn’s wife, offered to help. We talked about many things, including the fact that she and Shawn have custody of Shane, Amber’s son. We also talked about the affect it will have on Shawn now that his father has walked back into his life after 28 years.

As I chopped and she talked, I realized how at ease I felt in their home. Normally, I am nervous being in other people’s kitchens, no matter who they are. But this time, it was like it was my home. As I began to grill the onions and green peppers, I looked down at the pan.

Then it hit me for a slight second: I am nuts, this is nuts, what are we doing? We are in a stranger’s home cooking fajitas all the way across the country!

No matter how much I know it’s God and it’s in my heart, I still could not grasp what I was truly doing and why? But we were and we did!

Dinner was served and they seemed to enjoy it. So did Mike and I. After dinner, Jeanette took us down the street to show us the new place that Theresa, Homer, and Heather were moving into. I would be lying if I told you that up until this point we had not been a little worried as to what Homer’s whereabouts were going to be once we left. He had been sleeping in a bed with Heather that already had three other people in it.

We wanted to make sure he was going to have a place to call his own and not be a burden on the family. As we drove up we were pleasantly surprised. The place they live in now, as Theresa says, is a 0 on a scale of 1 to 10. This place was a 10, for sure. It’s a huge mobile home with three bedrooms and two bathrooms. I think it even gave Homer peace, seeing it himself. We were so happy for all of them.

I mean after all, Homer brought this family hope enough to find a new place to live. And Homer went from cold, freezing, concrete streets to a place filled with his family. Honestly, who knows how long they would have stayed in the place they live now? But Homer does not care where it is as long as he is with all of them. Mike and I found out that the place they live in now is not even a legal place to live.

We ended the evening exhausted. Between the muggy and sticky weather and the 20 billion bites, Mike and I needed a shower and rest.

Sunday, we knew was basically our last day since we were leaving Monday morning. We decided to head to the beach for a few photos, since the chances of us going to Florida again are low. We thought “Hey! Why not? We’re here!” It was fun.

We got some shells for Molly and for some reason, everyone kept assuming we were on our honeymoon. They asked us or made comments when we asked them to take pictures of us. We said “Oh, gosh no! We have been married for 21 years!” They all seemed shocked! Maybe it was the joy in our eyes? Mike and I have lived quite a journey of our own getting to this point.

That’s a miracle in itself.

Mike and I did not know how to say goodbye, especially to Homer. I knew Mike would be a wreck. So we decided to do it Sunday night but we just could not! Instead Mike and I used the time to encourage them and to hopefully show them how much God was the reason for all this. To remind them that miracles do happen and there is HOPE for all of us.

Mike got choked up a few times and Homer said again “In my heart, you two, this is just the beginning. There may only be one Homer but your work has not even begun to start.” Heather was emotional as well, so we told them we would be back in the morning for a quick goodbye.

The last day was hard, yet I still felt peaceful. I told Theresa we would stay in touch and continue to help as we could. I asked her about Heather’s health and where she stands. Theresa said she sees a downhill decline coming. Heather only has 30% left of her lungs and all her organs are being attacked. She said she sees a hospital call coming very soon!

Heather was hiding from me and I called “Come on Heather, it’s time to go.” She said to me “Mom, I don’t want you to go.” She called me “Mom” and Mike “Dad.” I could not figure out why, since we are four years apart in age. I stayed calm up until that point and embraced this dying child of God so tightly. She said goodbye to Mike then ran inside.

Then it was goodbye to Homer. He said “I want you to know I am happy. I am going to be okay.” I was still calm, waiting for Mike to lose it, as I went to hug Homer. An uncontrollable emotion hit me from left field. I was shocked. Homer sparkled with bittersweet tears and I had to get out of there because I am the ball of joy; the one who always laughs, never thinks, never cries.

Unless God speaks to me, I hold it all together and I am the strong one. We said our goodbyes and got in the car. I was trembling so hard and Mike was even wondering as he comforted my head. In my mind I was asking myself “Why am I so upset? I am confused emotionally.”

As I tried to make sense to Mike, it was when I said the word “UNCONDITIONAL” that I almost choked. It hit me after all this time.

God said “You did what I asked you to do. You did what you, yourself, could not do. You just did what I asked. And you heard me right when I said “SERVE and LOVE.” It was a moment that words can’t do justice. What I felt was very intense. But I myself did nothing. It was Him; it was God.

I was not only doing things I never thought possible, but doing them with my husband whom at one time I wished dead and flying across the country when I hate to fly. I had walked into a stranger’s home who lived so poorly that you and I might shun them. Yet I had the most joy, the most peace even while I couldn’t make it all connect.

If I was able to grasp it all, it would have been about me. I would have taken the credit. I would have boasted about what I did, what we did. But I felt as if I, Jessica, was never there. (Does any of this make sense? I told you all I was nuts). This whole thing was about Him, my Father, Jesus, the one who walked the walk and suffered for me.

Matthew 25:35 God said- For I was hungry and you fed me. I was thirsty and you gave me something to drink, I was a stranger and you invited me into your home, I was naked and you gave me clothing, I was sick and you cared for me. And I was in prison and you visited me.

And I replied when did I feed you and clothe you show you hospitality or care for you. He said when you did it to them you did it to me.

We are called to do this together, not just me not just you, ALL OF US. Let God lead you.

It will change your life!