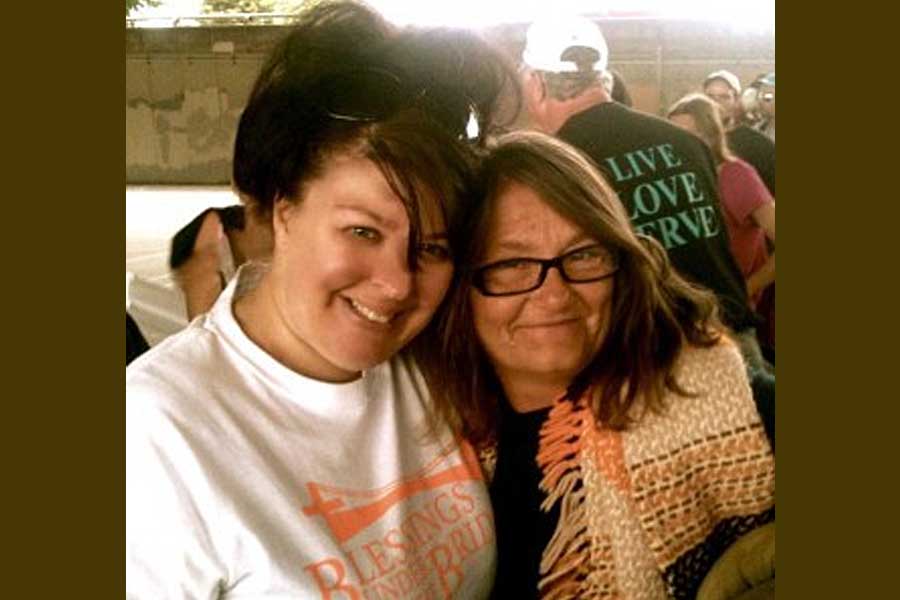 It’s been quite a week with Dwight in the hospital fighting for his life.

For those who don’t know: Carol Anne was also homeless when we met her years ago. Back in the old days when BUTB operated by feed stops and routes. She had been diagnosed with several illnesses and told she was terminal. As our small group grew closer to her, she always made us laugh and smile. She had a child like heart. She had a tough life and was a part from her children for years.

In 2012, her dying wish was to marry Clay, her then boyfriend. So with a heavy heart, I felt led to make that happen. With the word spread and the help of many in the community, we came together and threw her a real wedding in the very park she had been sleeping in.

I was able to locate and reunite her with 3 of her 4 children after close to 20 years. Her son Michael walked her down the aisle. KXLY filmed her wedding and everyone saw how happy she was.

She struggled with so many things including alcohol. She also brought joy to me and so many of our BUTB family! Clay, her husband, loves her so much. They endured some tough times over the years. I will never forget how sad she was when Soda Pop died. At times on Wednesday nights she would cry and say how much she loved her children, and how she had failed them one too many times.

This past year her health had gotten worse. Coughing up blood, and it seemed like every month she was in and out of the hospital. She was a stubborn fighter. I know she had been upset about Dwight’s accident but hadn’t seen him yet. The street life isn’t the same as our convenient lives. Communication out there is hard.

I feel almost numb for so many reasons. Dwight doesn’t know. Clay, her husband, may not know as he too was hit by a car 2 days before Dwight. She had reached out to me on Monday looking for him. Carol Anne and I were very close. It didn’t matter to me her struggles. She made friends easily with so many at the feeds. When Paul Mitchell would come cut hair she always got her hair cut. She wanted to look pretty for Clay. When she got married, Brooke and Alyssa made her look like a princess.

I loved her very much. I don’t understand this, as this week has been pretty emotionally draining. I know many of you helped us with her wedding and her getting her into her home, which she eventually lost. I can’t tell you how many times I/we have prayed over her and for her. I could keep sharing as I still can’t comprehend this. We will have a memorial under the bridge soon. I will keep you updated.

Please pray for her husband, Clay as I mentioned before. Soda pop, Dwight, Clay, and Carol Anne were so very close. This is such a terrible hardship for so many reasons.